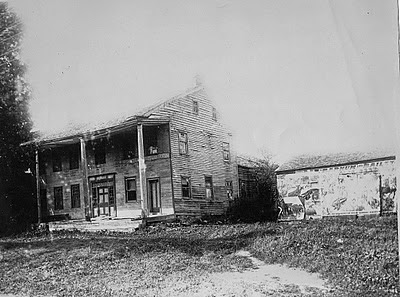 This old structure at Half Acre was once a tavern/inn on the Seneca Turnpike (also call the Genesee Road) two miles west of Auburn, N.Y.  It stood on the north side of the road. Built during the heyday of the stagecoach era, it was originally operated by Henry Ramsay in the 1820s or before. Later it was operated by Henry who in turn sold it to Diodorus Westover in 1856. Upon his death in 1864 his wife, Betsey, and daughter, Susan May, operated it. The local post office was located here "conveniently" next to the bar. The dining room in the old days could seat 40. There was a ballroom on he second floor. Many social events were held here. Upon Mrs. Westover's death in 1908 it was razed to allow expansion of the local cemetery. Two other taverns still stand at the corner as private homes.

THE LAST STAGE.
THE RAILROAD AND THE STAGES.
_______
The last Stage leaves Geneva Saturday - A look at the past.
_____
Saturday next, January 18, 1879, will mark an era in the history and progress of Geneva. On that day the last stage will make its last trip - the Geneva and Clyde stage line will after Saturday be a thing of the past. The withdrawal of the stage would not in itself be a very noteworthy occurrence, but the fact that it brings the end of the stage business in Geneva is an interesting one.
There was a time when stages were as plenty and nearly as noisy in Geneva as railroad trains are now; when it was a prominent station on the Albany and Buffalo stage route. Our older citizens well remember the sight and sound of the large, heavily loaded stages, as with cracking whips and blowing horns they rattled through the streets, on their way east and west through the villages and wilds of the then new state.
In the busy season it was no uncommon thing for from three to six stages to pass through Geneva every three hours. All stopped at Hemenway's Hotel, now the Water Cure; driving up to the piazza with a grand flourish, the row of coaches standing in front of the house while passengers and drivers went in for refreshment - solid and liquid.
Geneva was one of the important stations on the stage route, and in 1823 orders were given that the mails between Albany and Buffalo should be opened only at Geneva. The stage business was at its height in 1830. In those days stages were the only means of communication for persons desirous of losing no time. A gentleman of this village, who came here in 1822, by stage, left Northampton, Massachusetts, on Monday, and arrived in Geneva on Friday. On one of his trips west from Albany an attempt was made to rob the stage between Albany and Schenectady, by cutting loose the baggage in the boot behind.
The passengers heard the noise, and turned out in time to save their goods. It was not an uncommon thing for the stage to be robbed.  In 1811, as shown by an old copy of the Expositor, printed here then, Geneva was the post3 office for Seneca, Sodus, Romulus, Phelps, Junius, Palmyra, Lyons, Crooked Lake, and many other places. E. White, post, informs his patrons that he will no longer carry papers. In 1808 a "post rider's notice" offers an opportunity for people indebted for newspapers delivered by Elijah Wilder so he could pay for his wheat.
In 1823, a New York paper noted as an example of extraordinary speed that a stage traveled from Utica to Albany, 96 miles, in 9 hours and 10 minutes. The same year Ry's Register records that this village is connected with the outside world by three daily stages for Rochester and Buffalo west, Utica, Albany and Cherry Valley east; to Bath and Angelica twice a week; to Ithaca, Owego and Newburgh, three times weekly; and to Lyons and Sodus once a week.
With the completion of the Central road, which was celebrated with great rejoicing on July 4, 1854, the main line of stages was of course discontinued. As the railroads have increased, the stage traffic has fallen off, till for several years the Clyde stage has been the only one left. The construction of the Geneva and Lyons Railroad now necessitates the abandonment of that route, and the victory of the locomotive over the stage is complete.

(From Book D, Miscellaneous Records, Page 183-4, Ontario County Clerk,  Canandaigua, Recorded January 19th, 1839).
Articles of Association
Stage Drivers Library and Reading Room Association
Article  1.  We the undersigned Stage Drivers of the Village of Canandaigua hereby form ourselves into a society to be known  and distinguished by the appellation of The Canandaigua Stage Drivers Library and Reading-Room Association and bind ourselves individually to pay the sum of 12 1/2 cents per month to the President of Said Association which  said monies are to be expended from time to time as said President shall se fit  for the purchase of Books, Periodicals, &c. for the benefit of the association.
Article 2. No  member of this Association or any other person shall have the privilege of removing any book, periodical or other property of this Association from the room in which said books &c are kept.
Article 3. The officers of this Association shall be a president, vice president  and librarian who shall be elected by ballot, on the first day of January in each year.
Article 4. The President shall perform all the duties usually  incumbent on that office and in  his absence those duties shall be performed by the Vice-President.
Article 5. Any Stage Driver  in Canandaigua may become a member of this Association by subscribing this constitution and complying with the requirements herein contained.
Article 6. This constitution may be amended by  vote of two-thirds of the members of the Association.
Canandaigua, January 1st, 1839.
President Stephen  B.  Austin
Vice  President George B. Hotchkiss
Librarian  Perry G. Wadhams  &c. 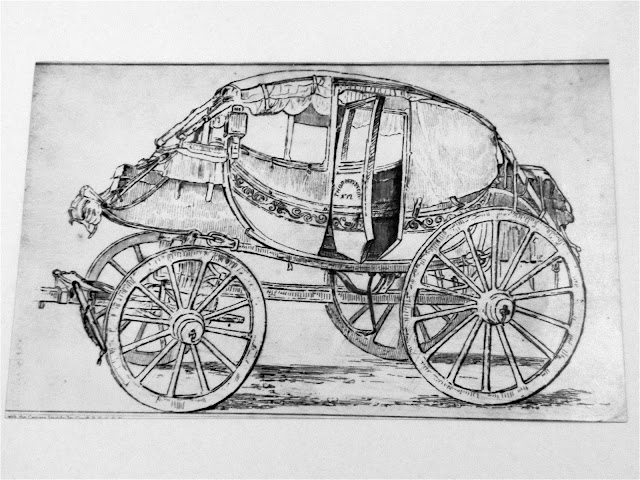 Geneva Gazette
Feb. 16, 1825
(Advertisement)
Three times a Week
From Geneva to Penn-Yan
Leaves Geneva Mondays, Thursdays & Saturdays.
Leaves Penn-Yan Tuesdays, Fridays & Sundays.
____
MAIL STAGES have commenced and will run regularly  twice a week from Owego, by the way of Tioga Point, Chemung, Elmira, Big Flats, Painted Post, Campbelltown, Bath, Howard, Hornellsville, Dansville, Geneseo and Avon, to Rochester. Also, to Olean Point by way of Bath and Angelica - through in less than 3 days - Fare, $6.25. Leaves Owego and Rochester on Wednesdays and Sundays, - From Geneva by Penn Yan, Wayne, Bath, Howard, Hornellsville, Almond, Angelica, Friendship, Oil Creek, to Olean Point  - through in  2 1/2 days - Fare, $5.00.  Leaves Geneva Mondays and Thursdays; Olean, Wednesdays and Sundays.
These lines meet regularly at Bath and Hornellsville, so that travellers may pass to either section without delay. They intersect, at Geneva and Avon, the Albany and Buffalo lines; at Rochester, the Lewiston line; at Geneseo, the Canandaigua & Moscow line; at Painted Post,  a line to Williamsport, Pa.; at Elmira, a line to the latter pace - also, a line from Berwick, Pa. to Geneva, by way of Ovid; at Tioga Point, a line to Wilkesbarre; at Owego, the several lines from New York, Milford, Newburgh and Ithaca, Washington City, Baltimore, Philadelphia, Lancaster, Easton, Harrisburg, Northumberland, Wilkesbarre, Montrose, &c.
Good Horses, new Coaches, and careful, attentive Drivers are employed. Every attention will be paid to the comfort and safety of Passengers. The Proprietors have expended large sums in establishing these lines, and are determined to conduct them at all times in such manner as to merit a liberal patronage.
JOHN MAGEE, of Bath,
and Others, Proprietors.
January 1, 1825.
N.B. - Boats and Skiffs of all sizes will be constantly kept at Olean to accommodate such as may wish to descend the Allegany river, during the months of April, May, June, July, October, November and the fore part of December. Travellers may generally pass from Geneva to Pittsburgh in about 5 or 6 days. When there are two or more in company, their whole expenses will not exceed ten dollars each.
Note: John Magee was a pioneer stagecoach proprietor in the Southern Tier.
_____________

Perry Democrat, Aug. 12, 1841
STAND AWAY CANOES,
And let the Steamboat Come
THE Subscriber has commenced running a Line
of Mail Coaches from
ALEXANDER to GENESEO,
Leave Geneva every Tuesday, Thursday and Saturday, at three P.M. - arrive at Alexander at 11 P.M., intersecting the Swiftsure line of Stages to Buffalo and Batavia.
Leave Alexander every Monday, Wednesday, and Friday, at 5 o'clock A.M. - arrive  at Covington at 9 1-2 A.M., and Geneseo at 12 M., intersecting the Canandaigua, Dansville, Mount Morris and Rochester States, and the packets on the Genesee Valley Canal, passing through the following places: Attica, Vermal, Lindon, Middlebury, Pearl Creek, Covington, Peoria, Pifferdinia, to Geneseo.
Passengers will find it to their advantage to take this Stage, as this is the shortest and most direct route from Canandaigua to Buffalo, and passage through a delightful country.
Good Horses and Carriages, and none but careful Drivers employed.
J.D. BARTLETT.
Alexander, July, 1841
Posted by Richard Palmer at 3:43 PM No comments:

The Erie Canal and the Stagecoach 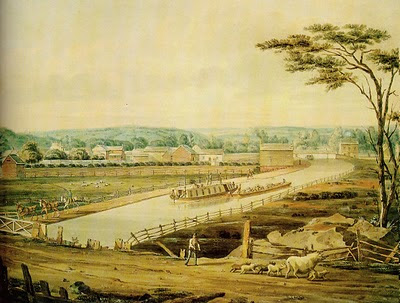 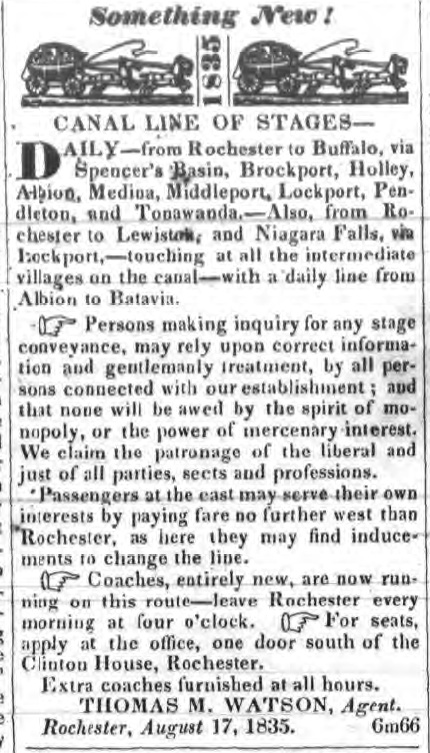 Posted by Richard Palmer at 7:09 PM No comments: 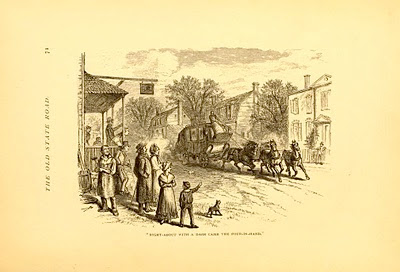 Posted by Richard Palmer at 7:03 PM No comments: