A New Line of Stages has been established between this village and Cortland village, passing through Jamesville, Pompey Hill, Fabius, Truxton and Homer. It leaves this place every day a 1 o'clock P.M. and arrives at Cortland at 9 in the evening. Leaves Cortland every morning at 4 o'clock, and arrives at Salina at noon. Proprietors, - Daniels, Warner and Bennett, Syracuse - Dyer, Bartlett & Curtis, Pompey.

Mail Robbery. - On Tuesday evening of last week the western mail bag containing the mails for Utica, Geneva, Canandaigua and Rochester, and the branch routes therefrom, was cut open and all taken out except the bag for Utica. The robbery was accomplished between Albany and Schenectady. The mails stolen contained letters and papers for the southern and western counties of the state. The large bag would undoubtedly been taken had it not been secured by an iron chain.
The mail bags have been found near the turnpike, about 3 miles from Albany. The letters and package had all been opened, and the money taken out. The letters and packages have been preserved by the Postmaster at Albany, who has advertised them as intelligibly as their mutilated condition would permit. We do not perceive that any of them were directed to persons in this vicinity. The amount of money taken is up posed to be small. The robbers have thus far escaped detection.

Another Mail Robbery.  - The Northern Mail from Albany to Whitehall, was robbed on the 21st inst. by two of the passengers. One of them, whose name is Fisher, has been apprehended, and a part of the money stolen from letters in the mail found upon him. He has confessed to the robbery, but will not expose his accomplice. He also turns out tat he is one of the robbers of the Western Mail between Schenectady and Albany, mentioned in our last.
Posted by Richard Palmer at 3:00 PM No comments:

Syracuse and Homer Line of Post-Coaches 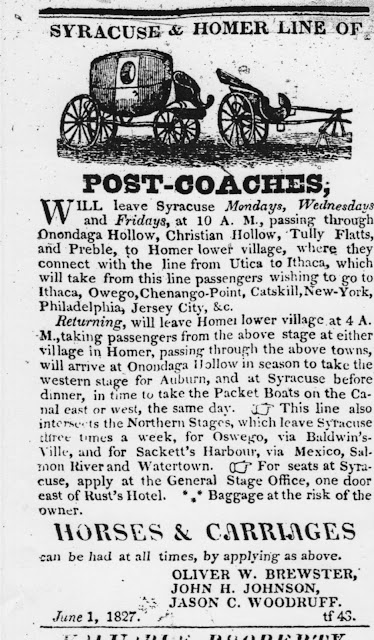 Posted by Richard Palmer at 2:26 PM No comments: