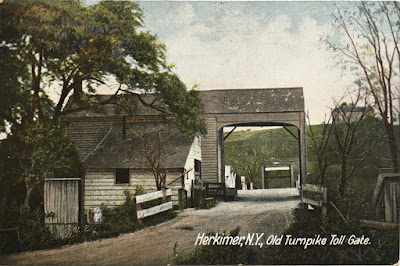 Posted by Richard Palmer at 1:03 AM No comments: 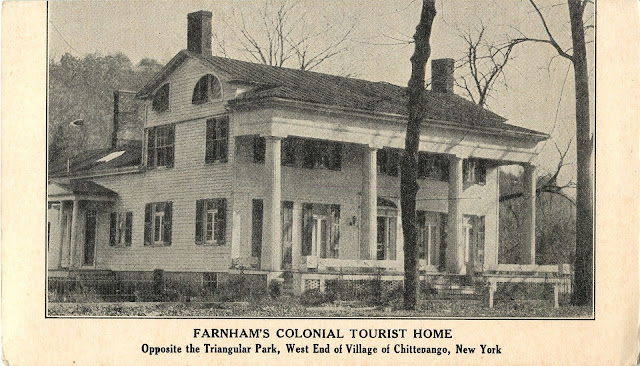 Posted by Richard Palmer at 10:34 PM No comments: 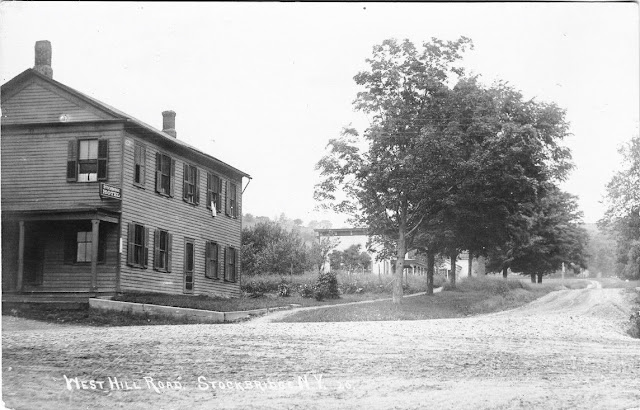 Posted by Richard Palmer at 10:27 PM No comments:

Eldorado House in Harpersville in 1876 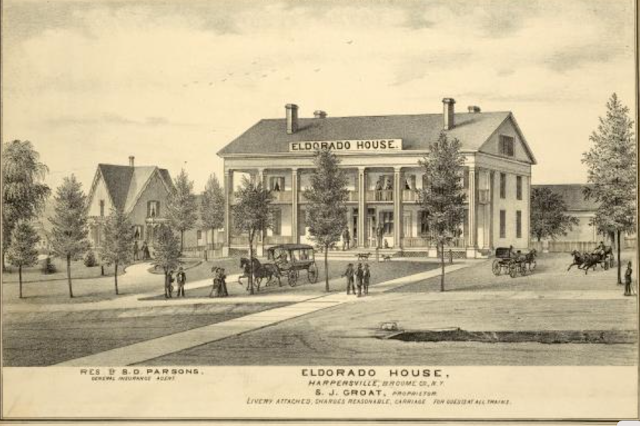 Posted by Richard Palmer at 9:16 PM No comments: 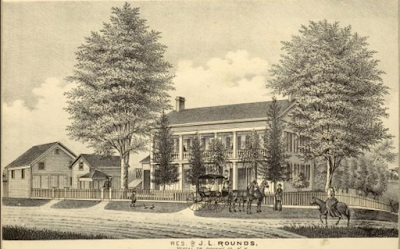 The old house at No. 2 Pumphouse Road in Vestal is a remnant of stagecoach days. It started life as the Rounds Turnpike Tavern in 1821. When brothers John and Jacob Rounds inherited their father's old business in 1844, they named their tavern after the clientele; Drovers Inn.
“It was an inn for the drovers or the gentleman who brought livestock up through from Pennsylvania up through to cross the river and go into Union and go to market," says Vestal Town Historian Margaret Hadsell. The inn was a convenient stop before crossing the river, a leg of the journey the Rounds' capitalized on. They bought the ferry and collected fares to move the drovers and their livestock across the river to market.
The large Rounds family was very influential in Vestal. "They really were involved in everything," Hadsell said. They were farmers, owned a mill and a logging business. One member of the Rounds family was station master at the railroad station. Another another ran the coal company, and Jacob Rounds served several terms as Town Supervisor starting in 1859. Jacob also served as Vestal Town Supervisor. 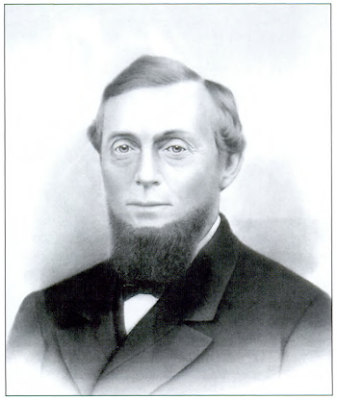 The inn's grand opening event was a ball in celebration of President James Polk's election. The event gave rise to a rumor that the Rounds had installed springs in the floor. “I had heard that many many years ago," Hadsell said.  "There are no springs in the floor.” The inn remained in business for 11 years before Jacob Rounds turned it into a private home for his wife and four children. Although it started life as a tavern, it has served as a nursing home, funeral parlor, and a restaurant. 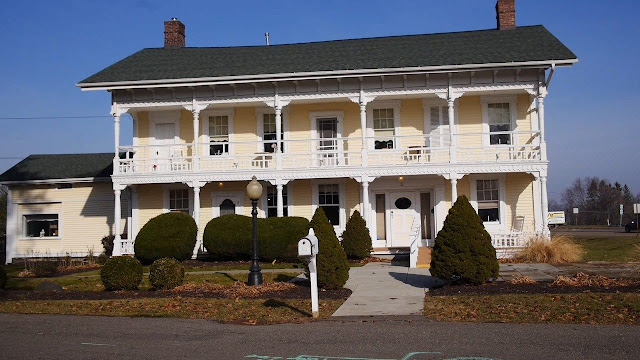 As it appears today

Posted by Richard Palmer at 9:14 PM No comments:

[From: Binghamton: Its Development, Growth and Development, and The Factors In Its History, 1800-1900 by William Summer Lawyer. Century Memorial Publishing Co., Binghamton] 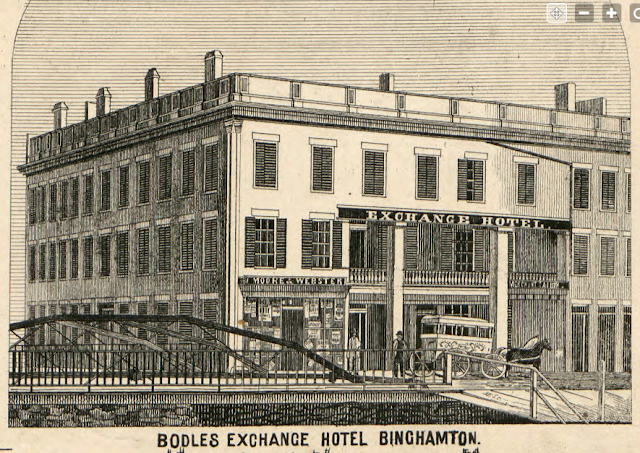 Exchange Hotel in Binghamton catered to stagecoach travelers. From 1855 map of Broome County

(Page 269)
Mail  and Stage Coaching. - The first and principal object of the turnpike roads above mentioned was the expectation of profit on the part of their respective proprietors. Still other roads were projected
but were not built, but all these endeavors were directly beneficial to local interests. As early as 1816 or '17 to firm of Teeter & Huntington put a mail coach on the road between Newburgh and Owego, Conrad Teeter himself being the driver and traveling with a two horse team the entire distance, making one trip each way weekly.
In 1818 a company was formed to operate a mail and passenger stage line over the same route, but extended the latter from Owego to Ithaca, and made tri-weekly trips.  In 1820, Dr. Tracy Robinson and Major Augustus Morgan succeeded to the company's interest in the line and inaugurated a system of travel and transportation which was maintained until the construction of railroads made the business unprofitable.
This, perhaps, was Major Morgan's most conspicuous service in connection with the early history of Binghamton. He was partner for a time with Dr. Robinson but soon became sole proprietor. The firm ran the first regular stagecoach through this village about 1823. Among the principal lines in which Major Morgan was interested was that from Newburgh to Binghamton and thence to Ithaca. Another was from Jersey City to Owego, and still another from Catskill to Geneva. All were for years operated by the firm of A. Morgan & Co., with this village as general headquarters.
At the terminal points connections were established and passengers and mails were thereby carried to distant parts of the state. In several of the connecting lines Major Morgan had an interest, though this village was the chief seat of his operations. Among his old-time partners, besides Dr. Robinson, were Isaac Tompkins, Sidney T. Robinson, and perhaps others whose names are not recalled.
As early as 1818 or '19, a two-horse wagon began carrying passengers between this village and Oxford, under the proprietorship of one Willoughby, making weekly trips. After a year or two the number of
trips was doubled and George Mansell became owner of the line, doing his own driving. In 1825 he put a four-horse mail and passenger coach on the line and extended his route to Utica, but the easier means of
travel afforded by the Chenango canal eventually drove him out of business.
In 1828 John McPherson put a two-horse stage on the Montrose (P. 270) Turnpike, making weekly trips and thus opening communication with northern Pennsylvania. Daniel Searle afterward became over of this line. the Montrose stage line was maintained until about 25 years ago, when the D., L. & W. Railroad and its connections superseded the wooer means of travel.
One of the most interesting periods in the early history of our village was that usually termed stage coaching days. When the system was at its best the daily arrival and departure of the stages was an occasion of great moment among the villagers, while the ever active agents and speculators were constantly on hand to extol the qualities of the land held by them for sale. Our streets were nightly thronged with strangers and frequently the capacity of the village taverns was overtaxed.
The old Binghamton hotel, at the corner of Court and Water streets, Peterson’s tavern, at the corner of Main and Front streets, and the Broome County house (afterward the Phoenix and still later the Exchange hotel) were almost daily crowded with guests, business men and village hangers-on; and around the barns and in the streets stage coaches and vehicles of every description added to the thriving appearance of the place. The first serious blow to the staging industry in this locality was the construction of the Chenango canal, and the finishing stroke followed when the principal lines of steam railroads were opened for traffic. 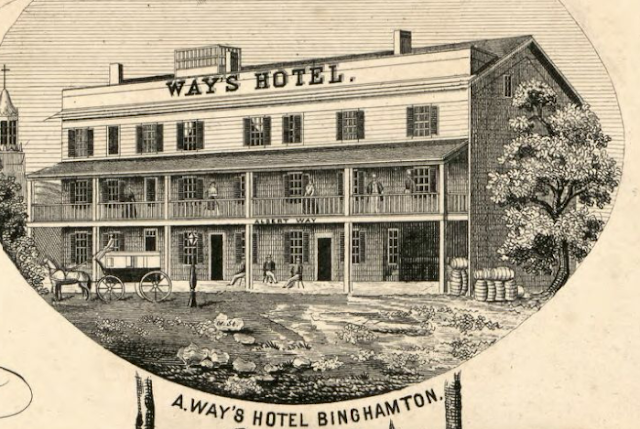 Way's Hotel was another Binghamton hostelry in stagecoach days. From the 1855 wall map of Broome County.

In this connection it is interesting to recall the names of some of the more prominent stage coach drivers who traveled through the village and made headquarters at the taverns of the place. They were “ Jack ”Finch, " Dave " Battle (who drove on the Binghamton, Corbettsville and Montrose line, and was a general favorite along the whole route), James Peterson (colored), ]ohn B. Bowen (who in later years was one of our most respected citizens), Erastus R. Campbell (afterward a business man in the city, for years chief of the fire department, and whose familiar figure is daily seen on our public streets), " Hank " Wolverton, Isaac Wilber, Ira Jennings, Milton Tousley, James Ager, Lemuel Winton, ]ohn Lampkins, Emory Truesdell (on the Montrose line), Asa and Merritt Truesdell, James Rockenstyre, Andrew Carter, “Jake " Hogan, Hubert Hogan, David Wormer and Harry Nash.

Posted by Richard Palmer at 8:01 PM No comments: 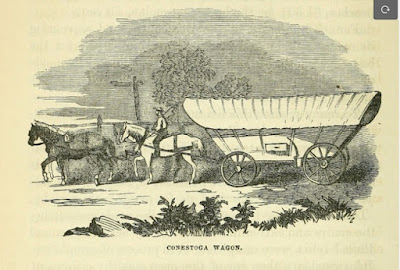 Posted by Richard Palmer at 11:08 AM No comments: