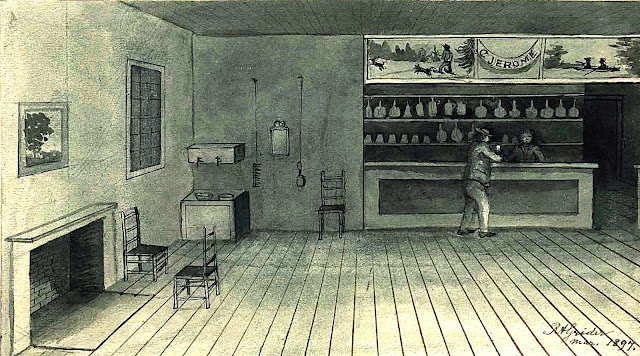 Interior of the Jerome Tavern on Mohawk Turnpike at St. Johnsville. By Rufus Grider.
Posted by Richard Palmer at 5:15 PM No comments:

Posted by Richard Palmer at 3:22 PM No comments: 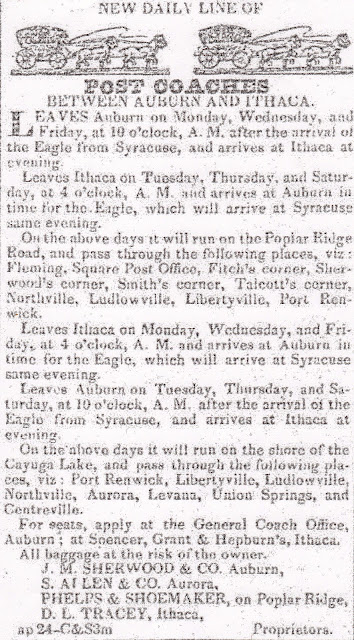 Posted by Richard Palmer at 3:10 PM No comments:

The Story of Cayuga Bridge 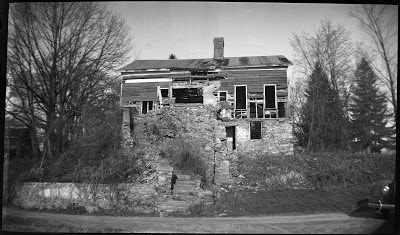 This is all that remained of the old toll house on the west side of Cayuga Lake in the 1930s. Photo courtesy of Bill Hecht

The Famous Cayuga Lake Bridge
By Seneca County Historian Wayne Gable
Few today are likely to know that at one time the bridge spanning Cayuga Lake near the north end was the longest bridge in the Western Hemisphere. The story of this Cayuga Lake Bridge helps to explain much of the early growth of Seneca County as well as western New York.
Following the American Revolution, there was an influx of white settlers into what is Seneca County as well as places further west—the so-called Genesee area. One major route was the Genesee turnpike road through Auburn to Cayuga Lake where ferry boats would then carry settlers and goods across the lake to where the road continued. It was quickly realized that a bridge spanning the lake would provide a much faster flow of goods and people.
On March 28, 1797, the State Legislature incorporated the Cayuga Bridge Company to build such a bridge. Work began in May 1799 and was completed September 4, 1800. The wooden bridge was 5,412 feet long, making it the longest bridge in the western hemisphere up to that time. The bridge was wide enough to allow three wagons abreast. At the eastern terminus of the bridge (where Cayuga, NY is today) were a tavern kept by Hugh Buckley and the first jail in Cayuga County. The Western terminus, aptly known as Bridgeport, had a toll house where the toll fee for use of the bridge was collected.
The bridge’s success was immediate but short-lived. Built on mudsills rather than post pilings, the defective construction made it susceptible to ice and lake currents. The harsh winter of 1807 led to its collapse in 1808. For the next several years travelers were dependent again upon a ferry until a second bridge was completed September 28, 1813.
The Cayuga Bridge had major competition, however, within a few years. In 1825, a new bridge—known as the Free Bridge--was built through the Montezuma Marshes just north of the lake. This bridge got its name because it was not the toll bridge about 6 miles to the south. An even greater competition, however, also came with the completion of the Seneca-Cayuga Canal in 1816 and the entire Erie Canal in 1825. Moving heavy goods by water was much cheaper than over land and bridge. One source says that road transport of goods at that time would cost $88 a ton, but use of the canal lowered costs to $22.50 a ton.
Perhaps at least partially to meet the competition of the Free Bridge route and the canals, a third Cayuga Bridge was built in 1833. This third bridge was built just north of the second bridge that was still usable. Tolls over this third bridge were 10 shillings ($1.25) for a carriage with 4 horses, 8 shillings for 2 horses, and 2 or 3 cents a head for each hog. Toll revenues varied from $300 to $500 daily. Railroad competition became very great after 1841. This new bridge was sold by the bridge company in 1853, although some limited use continued. When the bridge was finally abandoned about 1858, a Mr. Scoby of Union Springs bought the timber of the bridge for $450. It is reported that many buildings in Union Springs and Cayuga were built from these timbers.
Interestingly in both 1929 and 1930 the New York State Legislature passed bills authorizing the construction of a modern highway bridge over the ancient route of the Cayuga Bridge. Opposition from the Finger Lakes Association, however, prompted Governor Franklin D. Roosevelt to veto both bills. One can only speculate how different things might be today had such a new modern bridge have been built. Nevertheless, the contribution of the early Cayuga Lake bridges to the early settlement of Western New York cannot be denied.

Posted by Richard Palmer at 8:11 PM No comments:

The Packet and the Stagecoach


Posted by Richard Palmer at 12:28 PM No comments: 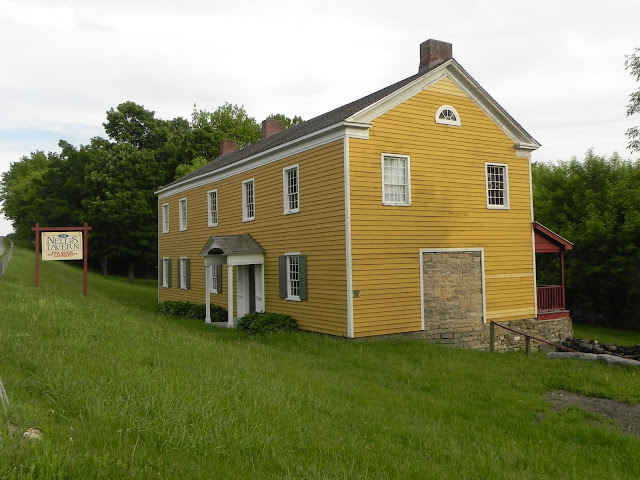 The Nellis Tavern along Route 5 at St. Johnsville, Montgomery County, New York,  is a historic inn and tavern built about 1750 as a farmhouse and expanded about 1790 to its present form. It is a two-story, five-by-two-bay frame residence constructed atop a coursed rubblestone foundation. After the coming of the railroad in 1836 the tavern business along the old Mohawk Turnpike declined and the building became a private residence. It was placed on the National Register of Historic Places in 1990. It was restored and is owned and operated as a museum by the Palatine Settlement Society. For further information go to www.palatinesettlementsociety.org and threerivershms.com/nellistavern2.htm
Posted by Richard Palmer at 8:29 PM No comments: