All Aboard for New Berlin

Stages from New Berlin
A Post Coach leaves New Berlin, via Plank Road, for Utica at 8 A.M. daily (except Sundays) or on arrival of Stages from Oneonta, Morris, Gilbertsville, Norwich and Bainbridge, and arrive in Utica at 3 P.M. in time for the Express train to Albany and evening train to Buffalo.   A stage leaves for Cooperstown daily at 1 P.M., on arrival of stage from Sherburne.
Also at 3 o’clock P.M. , or on arrival of Utica stage for Morris, Gilbertsville, Oneonta (which connects with stages to Franklin, Walton, Delhi, Prattsville, Otsego and Unadilla) South New Berlin, Mt. Upton, Bainbridge, Norwich, Oxford, Greene and Binghamton. Stage for Sherburne leaves at 12 Noon upon arrival of stage from Cooperstown. Packages taken to and from Express office, Utica.
W.D. Knapp and others, Proprietors 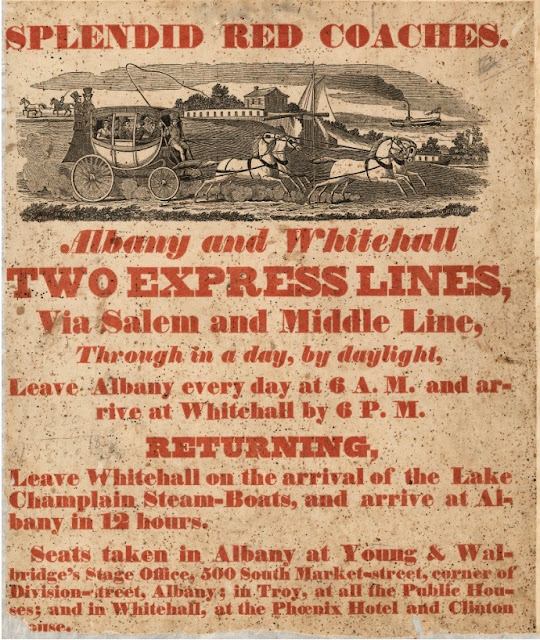 Posted by Richard Palmer at 6:58 PM No comments: 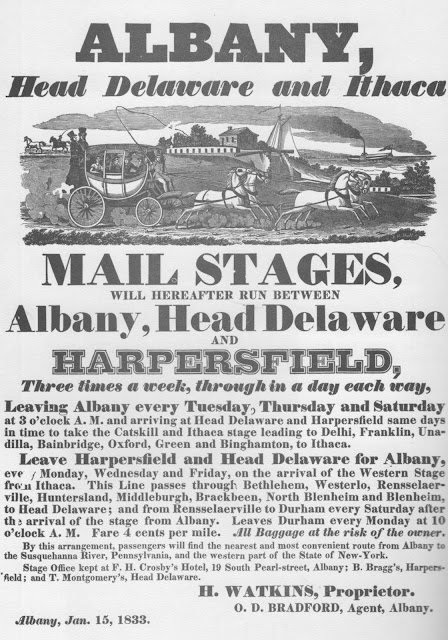 Posted by Richard Palmer at 2:23 PM No comments:

People's Line of Omnibuses out of Utica

People’s Line
1849
By Plank Road From Utica to Waterville, Earlville and Hamilton.
An OMNIBUS leaves Utica daily, Sundays excepted, at 2 p.m., for New Hartford, Clinton, Deansville, Waterville, Sangerfield Centre, North Brookfield, East Hamilton, P:oolsville and Earlville. Returning, leaves Earlville at 3 a.m., and arrives at Utica at 9:30 a.m., in time for the Eastern cars.
An Omnibus leaves Utica daily, Sundays excepted, at 2 p.m., on arrival of the Cars, for New Hartford, Clinton, Deansville, Oriskany Falls, Madison, Bouckville and Hamilton. Returning, leaves Hamilton at 4:30 a.m. and arrives at Utica in time for the morning train of Cars for the East.
Persons taking this Line will be enabled to reach Utica in time to transact their business, and return home the same day to the most distant points on the route. The route is run by a superior line of Omnibuses to Waterville, and Post Coaches the remainder of the route. This is surest and most expeditious route.
EXTRA COACHES furnished at all times on either of the above routes.
RATES OF FARE.
Utica to New Hartford, 12 1/2 cents
Clinton - 25 cents
Deansville - 38 cents
Waterville -  50 cents
Sangerfield Centre - 50 cents
North Brookfield - 75 cents
East Hamilton - 87 1/2 cents
Poolville and Earlville - $1.00
Madison - 62 1/2 cents
Bouckville 62 1/2 cents
Hamilton - 75 cents
APPLY AT THE FOLLOWING PLACES:
Utica - Chemango House, White’s Central Hotel; Clinton, P. Budlong’s Hotel; Deansville - H. & J. Curtiss; Waterrville - American Hotel, J.B. Brown; Sangerfield Centre, North Brookfield, East Hamilton, Poolville, Earlville - I.H. Dunham, Agent; Oriskany Falls, Madison, Bouckville, Hamilton - J. Cole, Agent.
N. B. Passengers going either to or from Binghamton are recommended not to pay their fares beyond Hamilton, as they may thereby save from four shillings to one dollar in the amount of fare.
The Agents of this line in Utica are T. KETCHUM, and H. HOLTON. This line has NO OTHER AGENTS in Utica, except the keepers of the Hotels named, and any other persons attempting to collect fares on its account are IMPOSTERS.