The Stage Driver's Story
___
How General Scott's Life was Saved and
How His Driver Twice Escaped Death
____
The traveler of the present day, as he is hurried by the lightning express, in its buffet cars and palace sleepers, seldom reverts in thought to the time when the stagecoach and packet were the only means of communication between distant points. It is rare that one of the real old-time stage drivers is met with now-a-days and when the writer recently ran across Fayette Haskell, of Lockport, N.Y.,  he felt like a bibliographer over the discovery of some volume of "forgotten lore."
Mr. Haskell, although one of the pioneers in stage driving (he formerly ran from Lewiston to Niagara Falls and Buffalo), is hale and hearty and bids fair to live man yearsy. The strange stories of his early adventures would fill a volume. At one time when going down a mountain near Lewiston with no less of a personage than General Winfield as a passenger, the brakes gave way and the coach came on the heels of the wheel horses. The only remedy was to whip the leaders to a gallop.
Gaining additional momentum with each revolution of the wheels the coach swayed and pitched down the mountain side into the streets of Lewiston. Straight ahead at the foot of the steep hill flowed the Niagara river, towards which the four horses dashed, apparently to certain death. Yet the firm hand never relaxed its hold nor the clear brain its conception of what must be done in the emergency.
On dashed the horses until the narrow dock was reached on the river bank, when by a masterly exhibition of nerve and daring , the coach was turned in scarce its own length and the horses brought to a stand still before the pale lookers-on could realize what had occurred. A purse was raised by General Scott and presented to Mr. Haskell with high compliments for his skill and bravery.
Notwithstanding all his strength and his robust constitution the strain of continuous work and exposure proved too much for Mr. Haskell's constitution. The constant jolting of the coach and the necessarily cramped position in which he was obliged to sit, contributed to this end, and at times he was obliged to abandon driving altogether.
Speaking of this period he said:
"I found it almost impossible to sleep at night; my appetite left me entirely and I had a tired feeling which I never knew before and could not account for."
"Did you give up driving entirely?"
"No. I tried to keep up but it as only with the greatest effort. This state of things continued for nearly twenty years until last October when I went all to pieces."
"In what way?"
"Oh, I doubled all up; could not walk without a cane and was incapable of any effort or exertion. I had a constant desire to urinate both day and night and although I felt like passing a gallon every ten minutes only a few drops would escape and they thick with sediment. Finally it ceased to flow entirely and I thought death was very near."
"What did you do then?"
"What I should have done before: listen to my wife. Under her advice I began a new treatment."
"And with what result?"
"Wonderful. It unstopped the closed passages and what was still more wonderful regulated the flow. The sediment vanished; my appetite returned and I am now well and good for twenty more years wholly through the aid of Warner's Safe Cure that has done wonders for me as well as for many others."
Mr. Haskell's experience is repeated every day in the lives of American men and women. An unknown evil is undermining the existence of an innumerable number who do not realize the danger they are in until health has entirely departed and death perhaps stares them in the face. To neglect such important matters is like drifting in the current of Niagara above the Falls.
Posted by Richard Palmer at 6:31 PM No comments: 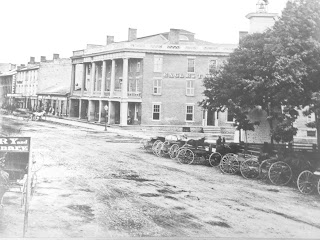 Posted by Richard Palmer at 6:29 PM No comments: 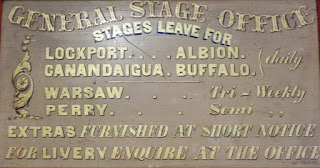 Posted by Richard Palmer at 6:25 PM No comments:

There is a magic in the calling of a stage-driver. Everybody knows and aspires to know the stage-driver; everybody is known by, and is proud to be known by, the stage-driver.  The little boys remember it a month. if the stage-driver speaks to them. There is a particular satisfaction to be able to distinguish among drivers, and say it was Winkle, or it was Nason, or it was Mitchell.
The stage-driver is prince of a peculiar realm; and that realm consists of the yellow coach he drives and the high seat he occupies, and his four mettlesome horses, and forty miles of country road, and the heart of several principal roads, not to speak of ten thousand little matters of interest and pleasure, business and profit, news and gossip, with which he is connected. Hence he, like a prince, is held in reverence of the populace.
Of all the people on the earth, he is the one who rolls by on a gilded coach; he is the one who rides through his immense estate with the most lordly and consequential air, and all the rest of us seem to be but poor tenants and gaping boors. It is something to speak to a stage-driver. It is a great thing to be recommended by the stage-driver. To be perchance known by one who knows nobody, is nothing. To be known, to be pointed out, to have your name whispered in a bystander's ear, bygone who knows everybody, affects you as if Omniscience were speaking of were speaking about you.  The stage-driver differs from a steamboat captain, in that the latter is not seen to be so immediately connected with his craft as the former. We meat the captain at the breakfast-table; he is nobody; he is no more than we; we can eat as well as he can. But who dare touch the stage-driver's ribbons? Who dare swing his whip?
How rapidly and securely he drives down one hill and up the next - and that with fifteen passengers and half a ton of baggage! Then how majestically he rounds to, at the door of the tavern! What delicate pomp in the movement of the four handsome horses! In what style the cloud of dust, that has served as an outrider all the way, passes off when the coach stops! How the villagers - the blacksmith, the shoemaker, the thoughtful politician, and the boozy loafers that fill the stoop - grin and stare, and make their criticism!
How he flings the reins and the horses to the stable-boy, who presently returns with a splendid relay! How he accepts those from the boy with that sort of air with which a king might be supposed to take his armor from the hands of a valet! There are his gloves, withal; he always wears gloves, as  Saratoga fine lady, and would no sooner touch anything without gloves than such a lady would a glass of Congress water.
There is, moreover, a mystery attached to the stage-driver - a mystery deeper than the question why the carcasses of elephants are found imbedded in the ice-mountains of the Arctics - even this. Why- the stage-driver is not frozen to death in our winters? His punctuality has something preternatural in it. How, in the coldest weather, in the severest storm, in fogs, in sleet, in hail, in lightning, in mud, when nobody else is abroad, the stage-driver appears rounding the corner, just as regular as just as quiet as the old clock in the kitchen!
Posted by Richard Palmer at 5:06 AM No comments: