National Hotel in Cuylerville was on Stage Route 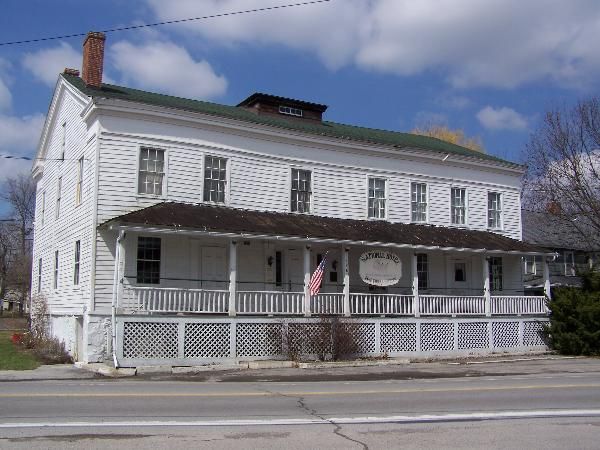 
The National Hotel at Cuylerville, N.Y. is architecturally significant as a rare surviving and largely intact example of large-scale highway and canal-related hostelry of the 1840s. Constructed near the intersection of the Big Tree Road and the Genesee Valley Canal, the building is historically significant as the only surviving canal-era commercial building from Cuylerville’s boom period as an important local port on the Genesee Valley Canal, and as the site of several events important in the later history of the hamlet and surrounding farming area.
The Town of Leicester was originally formed within Genesee County in 1802 as part of the Phelps and Gorham Purchase. It was the first town west of the Genesee River where a permanent settlement was made. As a result, the first crude roadway that ran west from Geneseo, across the Genesee River, passed through this location and the next few decades witnessed a considerable level of traffic and the establishment of a stage line operating twice a week.
Construction of the Genesee Valley Canal began in 1837 and was completed to the Cuylerville area in 1840. This intersection of east-west roadway and north-south waterway provided a prime location for business opportunities. The National Exchange was built in 1841 by Charles Phinney and opened under the charge of Truesdale Lamson who operated it for five years. According to local tradition, Lamson was a known abolitionist and reputedly conducted slaves through the inn as a station on the Underground Railroad.   Because of it size, location and interior arrangements, it is apparent that the National Exchange was among the better class of taverns at its opening.
In general, taverns located on stage routes offered the best accommodations, in part because of the stiff competition for trade that arose on these routes. Most taverns of all classes contained three major rooms: a large public room with a large open fireplace; a combination kitchen/dining room that may have been part of the public room; and a bedchamber.
The room layout in a typical 1820 tavern was a bar or tap room on the first floor, usually with two entrances, a sitting room, a long room on the second floor, attic space for the help to sleep, and a rear family dining room where guests were also served. The more primitive the tavern, the less specialized the room function.
The National Exchange could boast a large basement kitchen, large taproom that was accessible from within the premises and directly from outside, an elegant circular stair leading to the second-floor ball room (which no doubt did double duty as a dormitory), and several elegantly finished multi-purpose rooms on the north end of the first floor.   Canal trade brought prosperity to the area and within ten years the Village of Cuylerville was established and boasted numerous warehouses, stores, mills, and distilleries. Farmers in town to the west and south brought farm produce, lumber and some other goods to ship on the canal.
The National Exchange thrived as both a tavern and an inn, attracting business from the highway as well as the canal. The canal and a holding basin where located less that fifty yards from the hotel’s entrance, across the roadway that still passed directly in front of the building.   With the closing of the canal in 1871 the importance of Cuylerville and the National Exchange decreased considerably.
The Village of Cuylerville was dissolved in the late nineteenth century. The state sold the towpath of the canal to the Pennsylvania Railroad, which built a branch line through the area. The Cuylerville station was located directly across from the hotel and helped to maintain the commercial importance, albeit diminished, of the hamlet.
In 1906, the Sterling Salt Mine was established less than a mile from the National Hotel to capitalize on the rich deposits of salt under this portion of Livingston County. Cuylerville at this time saw an explosion of immigrants, primarily from Italy, to work in this new industry. The National Exchange became a gathering place for these laborers and their families and a boarding house for some. In 1916, the Italian-American Citizen Political Awakening Association was formed at the National Exchange. The hotel was owned and operated at this time by members of the Italian-American community.
Articles in local newspapers of the period, such as the Livingston Republican, indicate that the area was a hotbed for bootlegging during Prohibition in the late 1920s. Local tradition states that the hotel was an active speakeasy.   By 1930 the mine had closed and Cuylerville and the National Exchange went into a dormant state of existence, mainly catering to boarders and tavern patrons. The depressed state of the economy during the 1930s, the gradual decline in rail traffic, and the scarcity of gasoline during World War II combined to depress business and commerce in the hamlet during the late 1940s.
When the Mt. Morris dam project was under construction from 1948 to 1951 in the nearby town of Mt. Morris, the building provided lodging for engineers and construction personnel. In the early 1950s, the hotel was renovated as a restaurant catering to tourists. Reopened as the National Hotel, it became a destination for pleasure drives from the larger communities in the surrounding regions such as Rochester, Buffalo and Elmira. It is in this incarnation that the hotel continues operation today.
Posted by Richard Palmer at 5:28 PM